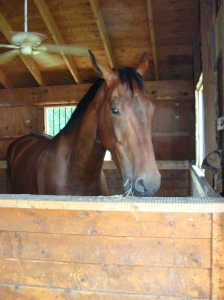 Think back to your elementary school days.  Imagine if the teacher told everyone else that they would get to go outside and relax and play on the playground, but you would have to stay back and have another math lesson.  What?!  No way!  That isn’t fair!  Well today was Ike’s day to throw himself on the floor and declare that he has the meanest teacher/mother ever!

I arrived at the farm after work – after the horses had been fed and had a chance to cool off in the barn.  The other horses were headed back to their paddocks for some late afternoon grass munching, but poor Ike had to stay behind to be groomed and tacked.  Sigh, how awful.  It isn’t like this was the first time that I’d ridden him later in the day, but he wanted none of it today.  He did not want to stand at the mounting block.  Usually, he will stand quietly while I adjust put on my gloves (which for some reason, I don’t do until after I mount).  Today, he decided to march with purpose over to the gate of his paddock.  Nice try, please keep marching past that gate and prepare to work.

My plan for the day was an easy workout since he’d just eaten and it was another hot day.  I read an article with Christopher Hess in my newest Dressage Today magazine where you would ride a square and perform a quarter turn on the haunches in each corner to start the next side of the square.  The exercise would be performed in each direction.  Sounded simple enough, but the exercise assumes that your horse will halt and wait for the rider’s aids to make the turn.  Halts were challenging today.  I’d ask and Ike would giraffe his neck and pull on the reins with those powerful “underneck” muscles.  Pppllbbbttt (the sound of Ike sticking his tongue out at me).  Ike would stomp his hooves, back up, push into my leg with the hind end, walk forward, back up again, anything to avoid halting.  I sat quietly and repeated my request until all movement would stop.  I abandoned the idea of any turns and concentrated on halts – obedient, quiet halts all while being patient and waiting for my next aid.  After 15 minutes of fuss, we had our first halt.  Phew, that was the hardest I have EVER worked for a halt.  Ike finally relented and we made progress.  We then trotted on and tried some centerline halts; Ike’s tantrum was over and Mr. Cooperative returned.  The boy can nail those halts when he sets his mind to it.

Everything else today was adequate – I’d have given us lots of 5’s and 6’s, maybe a 7 for some of the trot work.  We still have miles to go, but I marvel at how far we have come.  Time for me to do my final halt for the day.  Good night!