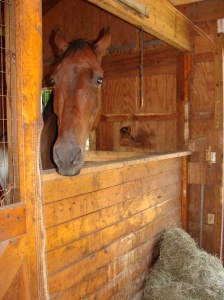 It has been a busy couple of days for Ike and now he is tucked safely into his stall for the night…and don’t worry, that pile of hay is now on the other side of the stall.  There would have been loud protests if it wasn’t.

I was down for the count yesterday.  My snot gland kicked into overdrive, and I spent the day in bed begging the cooties to go away.  They have been around for a week and have outstayed their welcome.  Since I wasn’t riding, I had Ms. C pop on Ike to help gauge his recovery and our progress.  Ms. C felt some wobbliness in Ike’s right hind to start especially when she tracked to the right at the trot.  She would stop and restart and gave Ike the chance to work out the kinks.  Ike was stable tracking left.  By the end of her ride, Ms. C felt that Ike had improved and that we must be still dealing with some stiffness from the vaccines.  Thankfully, it is not lameness.  Too bad I can’t fire up the hot tub and let Ike take a soak.  Now that would be a sight to see.

When I awoke today, the first thing I did was breathe in and out through my nose!  It is sad the things that can make me happy.  But having had to mouth breathe for the past week, it was nice to know that I’m now on the road to recovery…hope I can walk fast enough to catch up to Ike.  I arrived at the barn with about an hour to groom Ike and load the trailer.  Wouldn’t you know it, today was the day that Ike decided to wallow in the new mud like a pig.  Worst part was that it was still wet when I had to start grooming, so all the curry comb did was smear the mud into pretty swirls.  I broke out the bucket and rag and did my best to wipe away the offending mud.  [Note: As I was riding Ike today, I noticed the clumps of mud I missed in his mane.  Nice touch.]  Poor Ike was also doused in show sheen – it was my feeble attempt to disguise his filthy condition.  Perhaps Becky would be blinded by the gleam of his coat…fat chance.  Beauty shop time was over and I quickly loaded the trailer.  Wish I could have two of everything to avoid this process, but the long-lost rich uncle has still not materialized, so we load and unload with each outing.

Today was another milestone for Ike – his first experience in an indoor arena.  The indoor today is large and bright, the doors were open, and I hoped for the best.  Ike would not stand still at the mounting block.  He kept sidepassing away from it, so Becky finally suggested I walk him around a couple of times to let him check things out.  It wasn’t until the ride home that I realized that Ike saw his reflection in the mirror near the mounting block and didn’t realize that he was staring at and moving away from himself.  Silly boy.  Ike made me a very proud horsey mom today.  Becky liked his look, his demeanor, and his movement.  She repeated the same things I hear from Ms. C on a regular basis – too much inside rein, you are overbending the neck, sit up, your weight is too much to the inside/outside, don’t lean back in the halt…hmm, yet again rider error is the source of the problem.  Too help with my tendency to be too strong with one rein, she had me bridge my reins and ride.  Ah, a bit of a light bulb moment and what a difference it made to Ike’s straightness.  It forced me to keep my hands quieter and steadier.  Not something I had even considered trying, but I will continue to bridge the reins on subsequent rides to rethink my overuse of the inside rein.

I thoroughly enjoyed the clinic today.  Got to visit with old friends, see some lovely horses, and come away with some new tips and the feeling that Ike’s journey down centerline is going to be a blast as he matures.