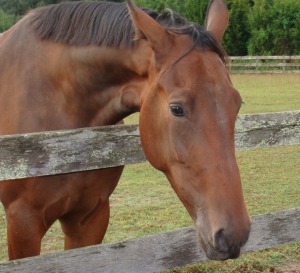 So here we are at the beginning of October.  You expect to see Halloween items in the store right now, but I’ve been in two stores recently and there right next to the Halloween costumes and decor, are the Christmas ornaments and the inflatable Santas.  Before we know it, Santa will be toting gifts in a pumpkin while riding a turkey.  I mention Christmas because both my equine boys will be getting new halters from Santa this year since they are hell-bent on destroying their current ones.  Well, if they behave, they will be getting gifts.  Cigar’s motto is “go ahead and put me on the naughty list.”  He likes to live on the edge.  Ike has been listening to his brother way too much recently.  His behavior today exceeded expectations for naughty.  When I yelled at him, Ike asked for clarification on the definition of good – I informed him that public outings top the list for good behavior expectations as well as listening to my aids while astride.  He was non-committal. and tried to steal the treats in my pocket.

From his forward thinking behavior today, I am led to believe that Ike is feeling better.  Mr. D watched my warm up and the first part of my ride and noted that he saw no abnormal movement or kinks.  That was the good news of the day.  Most of my ride was quality work today.  We nailed our canter transitions that have bugged us the past week.  Our trot loops were smoother and Ike actually reached into my contact for the stretch down trot circle.  So since things are going so well, I say to myself, “Self, let’s try some shoulder in and see if we can get that right hind to really come up and under.”  Maybe I got too greedy.  When I tapped Ike with the whip behind my right leg, that is when things got a little out of control.  That slight tap was obviously the signal for “let’s practice our canter lengthening…oh heck, let’s just run really, really fast.”  We were off to the races, and Ike wasn’t going to listen to anything I had to say until he was good and ready.  After close to 5 minutes, Ike finally heard my request to SLOW DOWN!  Spent the next 10 minutes walking him on a long rein to cool him down.  It was a bit warm and humid today and Ike was lathered after his jaunt;  I actually had to hose him down before tucking him in for the night.

Quite the day.  I’m hoping that this breaking bad behavior is temporary and that the schooling show on Sunday will be smooth sailing.  If Ike decides to test the definition of good again, I am doomed.