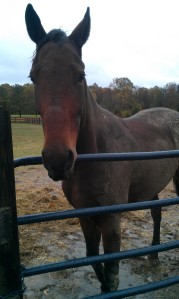 I am happy to report that all is well after Sandy blew through our area.  The only damage to our home or Ms. C’s farm is the phone line to our house is partially down in the backyard.  I am thankful.  My heart goes out to all those who faced the full effects of the Heartless Wench as I’ve dubbed Sandy.  There is coastal damage from Florida to Rhode Island and everywhere in between.

The horses had very limited turn out yesterday morning before the rain and wind picked up and had them begging for the safety and dryness of the barn.  I can tell you – they knew the storm was coming.  Ms. C and Mr. D said that they were keyed up as they were led to their paddocks and most confined their antics to their own paddock….and then there was Ike’s brother Cigar.  Cigar is one of those Thoroughbreds, you know the ones I mean, the screw is loose and sometimes falls out and rattles around the brain.  Cigar jigged on the way to his paddock, reared up, and pulled away from Ms. C as if he was breaking from a starting gate.  He managed to get into a brawl with Ms. C’s mare who was being led to her paddock.  They fought like banshees.  Ms. C and Mr. D finally got them separated and Cigar herded back to his paddock.  By this time, he was fired up and passaged over to one of the ponies and kicked at the fence.  Somehow, during the melee, he managed to tear up the front of his left hind leg…great.  Frankenstorm is on her way and I’m headed to the barn praying that I don’t have to call the vet for the fool.

By the time I arrived at the barn, the horses were safely tucked in their stalls.  They were all happy to see me, “the treat lady is here!”  I quickly handed out treats (the bucket bangers would have been inconsolable had they not been given a snack…yes, I’m well-trained).  I put Cigar’s halter on and did my best to get a close look at the leg.  Yes, it was bloody looking, but thankfully, Ms. C and Mr. D had already cold-hosed the leg, sprayed it with a topical medicated spray, and given Cigar some bute.  Unfortunately for me, Cigar knew my motive for being in his stall, so he was less than cooperative.  Every time I got too close to the leg, he would cock it as if to say, “go ahead, I dare you to touch it.”  Hmm,  I did managed to snap a grainy photo with my phone (forgot the camera in my rush).

It was right in the stifle area in the fleshy front part of the leg.  Hmm, what to do.  I sprayed the wound with additional medicated spray while chasing Cigar’s hind end around the stall while holding onto the lead rope…a modified ring around horsey mom, if you will.  I keep Wonder Dust on hand in the first aid kit, so I decided to apply it as well to help stop the bleeding and dry up the wound.  Interesting process dumping the dust into the palm of my right hand while holding the bottle and the lead rope in my left hand.  I then attempted to aim at the wound and just as I would throw the dust towards the leg, Cigar would move.  By the time I got the dust on the wound, his entire leg was a chalky, blue color.  Pretty.

Went back today and was pleased with how the leg looked.  The swelling was minimal. Cigar was placing his weight on the leg and continued to be uncooperative as I redressed the wound.  Ah, he was his normal self.  Good sign.  Since the swelling was slight, it leads me to believe that he got his leg hung on the fence as he was kicking, and left the hide on a fence board.  I’ll take that over a kick any day.  Thank goodness we averted the emergency vet visit this time.

As you can see from Ike’s photo, the horses were able to escape the confines of the barn for a few hours today, and Ike fully enjoyed the muddy slop.  He learned that trick from Cigar.  They were both contentedly eating hay in the drizzle when I left the barn.

I’m headed to the office tomorrow, but it will be good for Ike to have a full day of turnout after being cooped up for most of the past two days.  If life cooperates, I’ll be back in the saddle on Thursday.