Well, well, well, there hasn’t been much to write about this week as far as barn activities.  After getting cocky and riding four, yes four, days in a row over the long holiday weekend, the weather has decided to take me down a notch and keep my feet on the frozen ground.

Temperatures have hovered in the 20s during the day since Tuesday, and we had our first snow of the season yesterday.  I know my friends to the north would scoff at the wimpy winter we have had in Virginia.  Yes, even the hint of winter weather has us rushing to the store for milk, bread and toilet paper.  I never did understand this trio…where are the hot chocolate and marshmallows?  Did you not have a spare roll or two of toilet paper on hand already?  It isn’t like we will be snowed in for weeks on end.  People also rush out and buy shovels when the weatherman mentions the “s-word.”  Umm, what did you do with the one that you bought two years ago?  It isn’t like they go bad.

The 2-3 inches of snow that came yesterday was Ike’s first “big snow storm.”  What a momentous occasion for the big man.  Would he try to hover above the ground like he did during the one snow event (<1 inch) we had last winter?  Ms. C ended up bringing the big weenie back to the barn until the snow melted later that day.  I should not have worried.  Ike marched out of the barn like a horse on a mission and never really gave the snow much thought.  Ms. C said at one point he had been pushing the snow around (most likely looking for buried hay) and his entire muzzle was covered in snow.  Ah, one of those Kodak moments that I wasn’t around to see.  Bummer.

So what does one do when barn time is stifled and it is just way too cold to even be outdoors for long periods?  I cleaned out my files and shredded a trash bag’s worth of paper.  I organized my USEF, USDF, and Ike’s paperwork…well, okay, I gathered it all together and put it in one box.  That counts right?  I shopped on the Smartpak website trying to decide what to do with my windfall from Horse Junkies United.  Seriously thinking about getting the Dublin Pinnacle boots (http://www.smartpakequine.com/dublin-pinnacle-boot-9029p.aspx) even though I know my husband will tell me I have lost my freaking mind.  I attended my local dressage chapter’s annual banquet and collected Ike’s end of year awards – Champion at Intro and Third at Training.  Not bad for a horse that could barely canter a circle last April.  And my husband and I adopted a cute little mutt named Brownie from our local SPCA.  Why not add some chaos to the house with a 13 month old young dog? 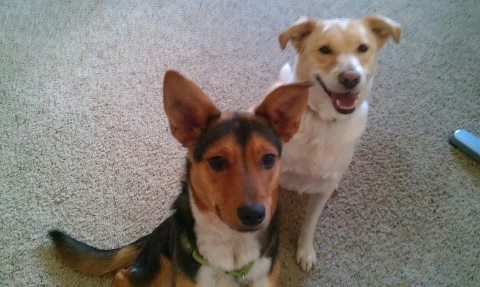 Brownie (in front) and his brother Spencer

We have one more day of cold temperatures and possible snow – I never believe it until I see the actual flakes – last week they said we were getting 6-8 inches and we ended up with just wet flakes with the cold rain.  A veritable heat wave will be here Saturday with a high temperature of 40 degrees.  That should be enough to melt the snow and thaw the arena for some walk/trot work.  Having withdrawal symptoms from lack of time in the saddle – I need my riding fix!  Those centerlines aren’t going to straighten themselves…