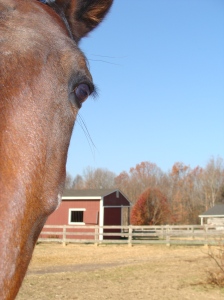 So who isn’t busy these days!?  I keep constant lists of things that need to be done at work, at home, and in the yard.  List of gifts to buy and people to call.  I have shopping lists and menu plans to use the food that I purchased before it goes bad.  I have lists of show dates and the dates that entries open.  I keep a small notebook in my purse at all times so that I can jot down something at any time – sort of old-fashioned that way – I’ve tried some of the phone apps, but none are as convenient as my little notebook with its tattered edges.  The lists help keep me focused and efficient.  It is the only way I can manage to fit everything in and still get some sleep so I can function and do it all over tomorrow.

Between a full-time job, three dogs, family time, housework, yard work and all the other activities of a middle-aged woman, I try as best I can to fit in my barn time.  Barn time is a precious commodity.  Some weeks I manage to make it to the barn five or six days and ride four or five of them.  Other weeks, life intervenes and I only ride two or three times.  Some would say that isn’t enough time to progress; I say to them, we will progress, just at a slower pace.  Think of the proverbial race between the tortoise and the hare…

Since barn time is limited, I try to keep my tack organized and my grooming routine as short as possible to maximize saddle time.  That is my game plan.  My horse however likes to derail those plans from time to time to remind me that I cannot control everything though I try and try.

Temperatures have started a warming trend which means that since Ike is not clipped, he can’t wear his winter sheets and blankets.  That leaves a very large mass exposed to the elements….and by elements…..I mean the M-U-D.  Yes, that is right, mud season has already started in the mid-Atlantic region.  Ike decided that he should partake of this early spring mud to “condition” his coat.  Except for the front of his head and his ears, almost every square inch of his hulking body was covered with caked, dried mud.  So much for more saddle time.  By the time he was clean enough to ride, I was dirty enough to not want to ride.  Well played Ike.

While my time in the saddle was going to be limited, I was going to get in the saddle.  Lucked out that the four-wheeling children were not out terrorizing the neighborhood, so Ike and I had a productive 30 minutes.  Started out long and low at the walk and trot to really get Ike to stretch over and use his back.  I then picked him up and worked on our square turns, circles, shallow loops and centerline turns.  Hmm, those centerlines are a bit wavy right now.  Need to start practicing them more to get back into show shape.  If I am going to fork over almost $180 for two tests at a licensed show ($40/test+drug fee+office fee+GAIG fee+haul in/stall fee), we’d better bring our A-game.  Our circles are good since we use them regularly, but our shallow loops are too abrupt rather than flowing.  Will add those to the list of things to practice.  And speaking of practice, Ike and I finished our ride by practicing Training Level Test 1.   Overall, I’d say we gave a 63-65% effort.  I think I remembered it from last year which is one less thing to add to my list.

Fingers crossed that tomorrow is more time in the saddle and less grit in my mouth.