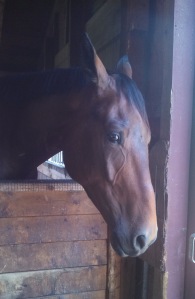 Today dawned a peaceful Thursday, no snow, no wind, no wretchedly cold temperatures.  The boys were scheduled for their monthly pedicures that had been rescheduled from last week when Mother Nature dumped almost 10 inches of snow on us.  I was in the middle of a typical work day when I received one of those emails that makes you pause, “Dooda is colicking and it doesn’t look good.”  There is that word that strikes fear into every horse owner’s gut – colic.  No, no, no, I thought to myself.  This can’t be happening to Ike’s best buddy, but it was.

Dooda was Ike’s first friend when Ike came to Virginia almost 3 years ago.  Yes, Ike has his brother, but brothers have to like each other.  Doo’s stall is across the aisle in the barn and their paddocks share a fence line.  One can only imagine the conversations they would have at night when we left them alone.  It brought a smile to my face to watch them play over the fence.  Dooda has been the barn’s first alert system to let everyone know when Ike left the farm and then again when we returned.  He never cared what color ribbon his friend had earned; he was just thrilled to have his buddy safe at home.

When I arrived at the farm today, my heart skipped a beat.  I did not see Doo’s grey head staring through his window nor did I see him in his paddock.  I then spied my boys staring towards the paddock at the end of the row.  There I found Ms. C and Mr. D sitting on an overturned water trough while they kept Dooda company.  He was laying down with his legs tucked under him.  The look on Ms. C’s face said so much.  My tears welled up as I approached my buddy.  I called his name and he nickered in response.  I crouched down next to him and whispered encouraging words.  He pressed his head into my chest as I scratched his ears.  It was a beautiful moment that I will not soon forget.

Recent articles online have declared that it is time we accept that animals are sentient.  One noted, “Shouldn’t we stop bickering about whether they are conscious, feel pain and experience emotions?” [http://www.livescience.com/39481-time-to-declare-animal-sentience.html]  I can confirm that they do feel pain and experience the same emotions we do.  End of discussion.  Both my boys today were very quiet for the farrier which is not normally the case.  All the other horses on the farm were also very quiet.  When I stopped to visit with each one, there was a knowing look in their eyes as they stared at me.  I have no doubt that they knew their herd member was suffering.

I helped get all the horses into the barn before I headed home.  My grey buddy immediately lay down with no interest in dinner.  After getting my boys squared away, I went and sat with Doo for one last time.  He sat up when I entered and again pressed his head to my chest as I stroked his neck and cheek.  Was it his way of trying to ease my pain?  I told him to be brave.  I told him how much I would miss him if he was to leave.  I told him to fight, but that I understood if it was his time.  I told him that Ike and I loved him very much.  I hugged Ms. C, kissed my boys, and headed home.

The sad news from Ms. C came late this afternoon.  They had to say goodbye.  Ms. C said that Ike called to Dooda as he walked out the barn doors for the last time and that Dooda nickered back to Ike.  Two dear friends saying their final farewells.  Rest in peace my friend.  We will always remember you.

2 thoughts on “One of Those Hard Barn Days”