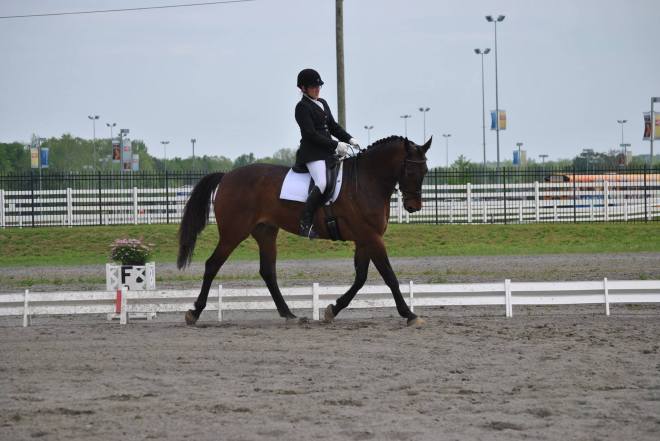 If you are of a certain age, you have probably watched the television show Get Smart starring Don Adams and Barbara Feldon.  Younger generations are probably more familiar with the movie of the same title starring Steve Carrell and Anne Hathaway.  Maxwell Smart’s famous tag line was, “Missed it by that much.”  That line pretty much sums up  our first licensed show last weekend.  It is that wee little bit that costs you dearly.

The weekend did not start off well given that Mother Nature had decided that we needed 15 straight days of rain leading up to the show.  I was so desperate to squeeze a lesson in before we went that I rode in some light rain.  We traveled to the show grounds in the rain, unloaded in the rain, and then sat in the barn listening to it rain even harder.  The covered arena was in use by the breed show, so most of us tacked up and rode in the rain and slop and prayed that Saturday would dawn a clearer day.

My first ride on Saturday was Second Level Test 2 – the qualifier for the USDF Region 1 CBLM Championship.  I needed a 62% to be qualified for the fall.  You only need one score and to be a member of one of the group membership organizations.  We’d been able to get some scores over the minimum at the schooling shows, so I was hopeful that we could get our score at this show to take some pressure off at future shows.  Heads up, watch my face closely as we make our first turn off centerline:

When your horse decided to show his medium canter rather than a medium trot, spook at the judge/scribe/plants/invisible boogey men, and then show his pivoting skills rather than a correct turn on the haunches, you end up with a score of 61.795% – a mere 0.205% away…yep, missed it by that much.  I would have to wait until Sunday to try again.

We also attempted to obtain that magical 60% in Second Level Test 3 that I need in order to try my musical freestyle at a licensed show.  This test has continued to vex us even though we are stronger in all of our Second Level work.  We have yet to ride it without a bobble or two, but I took a deep breath and headed down centerline.  Well, let me tell you, we did manage to ride both canter serpentines without breaking in the countercanter, but we again demonstrated our ability to plant Ike’s hind legs in the turn on the haunches.  Our score?  A 59.5%…sigh, another swing and a miss.  Since we only signed up for this test on Sunday, the coveted 60% will have to wait until June.

We had the one little bobble in the right lead countercanter, but after a quick prayer, I was able to get Ike back into the right lead so that we could demonstrate our simple change just a few strides later.  Phew!  Overall I was pleased with the ride; I had to just hope that the judge felt the same way.  After a 30 minute wait, the score was finally available online.  Drumroll please!  65.128%!!  We did it!!  Qualified!!  What?!  Ooohmmaahhhggeerrrrd!  What a huge relief.  Finally, we didn’t miss out by a hair or a nose.  There is hope for us yet.  We had many very good movement scores in this test.  I am proud to say that we earned a 6 and a 7 for our turn on the haunches (the secret is to nag at the caboose the entire time).  Our simple changes also were strong.

So now I can breathe a huge sigh of relief.  Don’t worry, I’m sure there will be plenty more misses on our way to the championship and plenty more comedic relief moments as well.  But that is part of the journey.

One thought on “Get Smart”