Ike’s first centerline and it most definitely won’t be his last.  I am so proud of my boy and how well he handled himself at his first dressage show ever.

The day started early – up at 4:15 and at the barn by 5:30 with a large coffee in hand.  Finished Ike’s braids, hooked up the trailer, applied a good coat of Show Sheen, and it was time to load.  All fingers were crossed that it went without protest.  Ike walked right on and we were on our way.  We arrived earlier than planned, but I’d built-in some extra time for loading.  It was good to have some extra time in the barn area.  Every horse in the stable whinnied hello when we arrived and then the cacophony and chaos ensued.  Every horse decided that we should provide their breakfast, and when we didn’t there was loud neighing and stall banging.  This got Ike worried and soon he was whinnying constantly and rearing in his stall.  Made the decision at that point to tack up and get him out of the morning madness.

Ms. C arrived as we finished tacking and we headed to warmup.  Lots of scary things to see on the show grounds.  Bleachers, jump standards, the John Deere tractor grooming the rings.  We walked for a good 20-30 minutes and Ike finally settled enough to focus.  I was glad to have Ms. C there to calm my nerves and give Ike confidence.  I also had a great cheering section with my dear friend T and her family and my husband.  What more could we have asked for on this gorgeous spring day.

The first test was Intro B – 66.2% and a blue ribbon.  (*The win should be asterisked since we were the only entry in the class.)  But, we stayed in the ring and got good feedback from Elizabeth Lewis (S).  Horses will always surprise you.  Centerlines at home have been straight and square.  This ride – first halt crooked and then a bit of canter on the final turn of the test.

The second test was Intro A – 70.9% and a blue ribbon (*).  The judge Kem Barbosa (S) commented that “you can move up!”  But we just started!  I’ll take the comment that we are on the right track with our training.

The third test was Intro C – 64.5% and a blue ribbon (*).  Ike was a bit rushed in his canter circles and got the wrong lead on the right (we were able to correct it).  This is where he struggles at home, so no surprise that we struggle at the show.  Kem Barbosa again said, “you are doing a good job.  Time to move up.”  So maybe at the next show we try one Intro and one Training test.  We shall see. [May 1st comment – Ike has asked that I mention that HE actually scored a 65.5%, but that I had an error which cost us one percentage point – I halted at X instead of G…duh.] 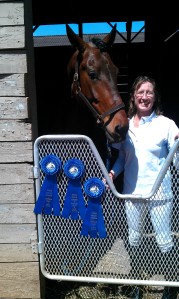 The only hiccup came when we were ready to go home.  Everything but Ike was loaded and he decided that he was NOT getting on the trailer.  My friend suggested that perhaps he was enjoying himself and wasn’t ready to go.  My husband and I were ready – tired and very hungry.  After 25 minutes of waiting, Ike hopped on.

Ike and I met our goals for the show.  We had fun, stayed in the ring, and I remembered to breathe.  My compliments to the Charlottesville Chapter of the Virginia Dressage Association.  This was a well run, low key show that was a perfect setting for a successful day.

Can’t wait to see what the rest of the summer holds.