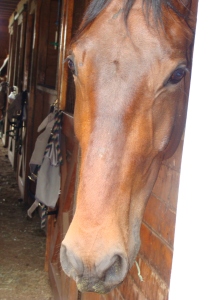 We are in the midst of a cicada invasion of the 17 year variety.  If I looked like these creepy creatures with big red eyes and orange wings, I’d hide under ground for 17 years too.  There are so many in the woods out near the farm that I feel like I’m on a distant planet in an old Star Trek episode as they buzz away.  They normally don’t bother me as long as they keep their distance.  Over the past few days though, we have had a few close calls.

At least 6 cicadas dive bomb my windshield with every trip to the barn.  I’m starting to question their maneuverability.  I’m also weary of scraping the residue off the glass.  On another day, poor Ike kept looking at one of the empty buckets in his stall and then looking at me.  I finally caught a clue and peeked in the bucket and found a cicada buzzing about apparently unable to find its way out.  I assisted its departure and Ike was much relieved.

The worst run in came yesterday at the end of my lesson.  I’m just glad that there were no cameras around or I’d be a star on YouTube by now.  I was still mounted and walking Ike to the gate when I heard a buzzing sound behind me.  Next thing I know, a “friendly” cicada decided to land on my shirt collar and THEN start to take a stroll up the nape of my neck and then down my shirt.  EEK! UGH!  I start squirming and screeching while trying to hold onto the reins and swatting away the offending creature.  This causes Ike to jig and become a bit worried.  I’m undeterred since there is no way I’m going to let the offending creature hide in my clothing.  Although it felt like forever, the struggle was over after about 15 seconds.  My new-found friend and I parted ways.  No offense, but I don’t think we will be hanging out in the future.

Riding this week was challenging as well.  Work, a trip out-of-town, and the weather all kept me out of the saddle more than I liked.  Ms. C did ride Ike for me one day and had positive things to say about our progress and the Myler bit.  She put Ike through the paces to gauge our recent progress.  She stressed that he is at the point in his training that we need to be black and white in what we want from him.  My sloppy habits aren’t going to help our progress.  If we don’t train for excellence, then it cannot be expected on centerline at a show.  It won’t be fixed in the next week, but I am going to try my best to think about what I am doing as we work rather than putting on the cruise control as I’m prone to do.

I’m still loving the new bit as are my arms and shoulders.  It is a great feeling to actually be able to give a correct half halt in the canter and have Ike respond appropriately.  With my other loose-ring snaffle, Ike would just lean on the bit.  I was just not strong enough to speak effectively.  Say what you like, but it is what it is.  If all I can do is whisper, but Ike needs me to yell, then we aren’t going to progress until we learn to communicate well.  The true test comes this coming weekend when we hit centerline.  Will the judge’s see what I am feeling or will they just see the flailing cicada-wearing rider?  Find out in six days!