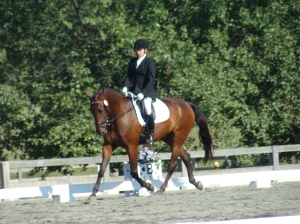 Phew, day one is behind us.  Ike is back in his paddock stretching his legs and resting up for day two tomorrow.  The saddle pad is in the wash, our new competitor number for day two is secured to our clean bridle, and I finally have some food in my stomach…I’m one of those people who can’t seem to eat much until my rides are done.  The dogs were also thrilled that we came home.  No, they do not come to shows with us.  We would be asked to leave the show grounds with our maniacal hounds howling at everyone as we drove away avoiding eye contact with show management.

The day started off early; I don’t even think the early birds were up yet.  The upside was that there was no rain, no humidity, and no horse flies.  We arrived early enough to the grounds that Ike was able to soak in the atmosphere without too much activity to frazzle his young mind.

Dare I say that it was a good thing that we tacked up 90 minutes before our first ride.  While Ike was as cool as a cucumber walking in hand, he was a bit of a handful to start my ride.  Best I could tell it was the sound of the vehicles and motorcycles driving by the show grounds.  The trees block the view, but Ike was very concerned by the noises.  Silly pony.  Warm up was a lot of walk-trot transitions on circles with countless half halts until Ike finally exhaled (maybe I did as well).  We did very little canter to keep the engines from revving too much.  Kept fingers crossed that we’d leave the spooky horse in warmup.

Headed into the ring for our first test with our hopes high that we’d get a score that would qualify us for the Colonel Bengt Ljungquist Memorial Championships in Raleigh, North Carolina.  The BLMs (http://www.cblm.org/) have been around for 31 years in Region 1.  I figured that they would be my alternate if I didn’t get my two scores for the GAIGs.  At Training Level, you need a 65% from Test 2 to qualify.  We’d come close earlier this year with a 63.9% and a 64.1%, but just hadn’t cleared that peak.  Today’s ride was stellar.  I was pleased with my ride.  Ms. C and my husband were pleased with our performance.  Now, to wait and see what the judge would say…I was warming up for my second class when the placements were announced.  Sadly, our number was not announced, so I’m thinking “crap, I thought it was a good ride.”  All my self-doubt flooded into the frontal lobe of my brain.  My husband is good at snapping me out of my self-defeating mind-set.  He proudly handed me my test with a 65.179% penned on the front.  We did it!  Good boy Ike!

No time to dwell on that score – had to look ahead to the next task at hand…getting that elusive second score for the GAIGs.  Seriously, it really shouldn’t be that hard to get a 63%, but it seems that I have managed to find a way to juuuuussssttt miss that cut off point: 62.6%. 61%.  62%.  So close and yet so far.  So we again don’t spend much time in warmup on canter.  Still trying to keep Ike calm and composed.  We headed into the ring with me taking a deep breath and trying to smile.  I’m not very good at smiling and concentrating – can’t walk and chew gum either…must me some connection.  Our first halt was squirrelly.  Trot was steady and our canter was actually better than the first test.  Today was one of the first times I can say that I thought our canter-to-trot transitions were actually balanced and done at the proper letter.  The biggest bobble was Ike dropping out of the right lead canter; that cost us 1.5 points (the judge had given us a 7 until we broke – bummer).  As I gave my final salute, I honestly thought we’d be lucky to clear 60%.  I still gave Ike all the love he deserved and headed back to the stables to untack.

I didn’t have to wait for long for my score since I was the last rider of the class.  Again, we didn’t see a ribbon, BUT we did manage to pull a 66.2% which means that WE HAVE TWO QUALIFYING SCORES!!!  What?!  Really?  No way!  I don’t think it has really hit me that we finally did it.  This will be the first time that I have ever qualified for the regional championships.  It is exciting and terrifying at the same time.

Break out the champagne!