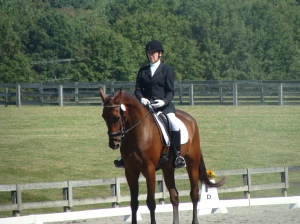 Photo from day one…

Well, sigh.  We ended up scratching our rides.  Disappointing for sure, but definitely the right thing to do.

Sunday did not start quite as early as Saturday.  My first ride was to be at 10:23.  I hopped on about 90 minutes early just in case Ike needed the time to stand and soak in the atmosphere again.  He did take notice at the very large, very yellow horse trailer as it pulled into the show grounds.  Heck, everyone couldn’t help but notice the Big Bird yellow trailer.  Warmup seemed to be going well until I asked for canter.  My girlfriend who was watching and helping me called me over.  “Did you feel that?”  “Maybe.”  Dare I say that I’m not always the quickest to feel any abnormal movement.  She and my husband noticed that Ike’s right hind was not moving as it should.  My husband said it looked like he was stiff legging it.  Hmm, not good.  Ms. L felt the leg and nothing was screaming, “here is where the pain is!”

Well, crap.  Came back for the second day with high hopes of bettering my Saturday scores, but it was not to be.  Better to stop than to make a small problem worse because of my greediness for a few extra percentage points.  Ike went home, ate some oats sprinkled with bute and was turned out with his buddies for the afternoon.

I headed back to the show to see if any extra volunteer bodies were needed.  I first caught up with some of my dressage buddies that I honestly don’t get to spend enough time with on a regular basis.  We all lead hectic lives complicated by our equine friends, not that we complain, but it does seem to limit social time.  I also watched some fun musical freestyles and did some shopping.  [Time for some boasting…]  My dressage chapter might not be the biggest one around, but we do put on a hell of a good licensed show.  We run the weekend as two one-day shows so people can get their two scores from two different shows and two different judges in one weekend if their rides go well.  We have cool prizes, a used tack sale, equine rescue booths, and have awesome vendors who bring must-have items for competitors and volunteers.  I voluntarily opened my wallet multiple times.

I then helped out at the awards table and bided my time until the worst job of the show was needed:  the show ground clean up crew.  Everyone is tired.  Everyone wants to go home, but someone has to break down the rings and load them on the trailers, take down the tents, pack up the ribbons and extra prizes, and show supplies and decorations.  Those 10-gallon buckets filled with stone that hold the signs aren’t going to march themselves back to storage.  Someone has to clean up the cigarette butts that someone thoughtlessly tossed in the grass.  Then all that stuff has to be hauled to storage and squirreled away until next year.  Why is it we forget to pack the cold beer to swill when all this is said and done?  It is exhausting, but each year we seem to learn a little something that makes the clean up just a wee bit easier.

The day didn’t turnout how I planned, but it was enjoyable nonetheless.  Great friends, gorgeous horses, and a sunny fall day.  Can’t ask for much more than that.

p.s. The vet comes Thursday to check out the big man.  He didn’t appear to be in any discomfort today.  I will pop on him tomorrow to gage where we are.  Keeping my fingers crossed that it is just something minor.

2 thoughts on “So What About Day Two of the Show?”