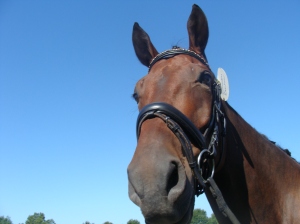 I have a bigger shoe budget than my mother…

So when I last blogged, I had scratched Ike from our Sunday rides because he wasn’t 100%…and now I know what the issue was.

Last year at this time, Ike had on hind shoes.  The problem was that he was so narrow behind, that he would interfere and the inside of his right pastern had a nasty sore that would not heal.  Every time we would make progress, Whack!, and we’d be back to square one.  Could not just blame the shoes because he did it even without them.  While training, Ike would wear neoprene pastern wraps that I found at Big D’s that are typically used on trotters.  They would help to some degree, but if he hit himself while they were on, the scab would rub off and expose the sore again. When show season was over last fall, I decided to pull Ike’s hind shoes and hoped that with continued work, Ike would stop the interference.

We got lucky.  As we continued to build his strength and he matured into his hulking body, the wound slowly began to heal.  Week by week, the spot grew smaller.  We started show season with no new sores and without hind shoes.  Even through the heat of July and August, Ike’s hind hooves held up without cracks or chips.  I began thinking that we’d make it without the expense of hind shoes…and that is where I was wrong.

Hoof testers found that big man was sore in his hind heels.  Ah, that would explain why he was stabbing the ground with his hinds.  He was sore and did not want to hit heel first.  Can’t blame him.  When I wear unsupportive shoes, my feet hurt like you-know-what.  A call was placed to our farrier, and hind shoes plus Equi-Thane went on the other day.  This definitely puts my horse’s shoe budget at a higher point than mine.

I’ve not pushed Ike under saddle yet – lots of walking while wearing his pastern wraps.  I was giving him a few days to get used to his new shoes.  Turns out, Ike decided not to follow my lead of overcautious riding.  When I arrived at the barn today, the first words out of Mr. D’s mouth were, “There is nothing wrong with your horse!  I think he is feeling quite well.”

Oh, really?!  It was 47 degrees when the horses were turned out this morning.  Ike must have slept well and his new shoes must be helping his heel pain.  He put on quite the display of rearing, bucking, galloping and Hackney trotting according to Mr. D.  I’m just glad that the fool didn’t tear off one of his shoes while cavorting about his paddock.

Well, big man, we will be back to work sooner than later since you have now proven to me that all is well.  T-minus 34 days and counting until our regional final.  Look out Lexington, Virginia, Ike is headed your way!

2 thoughts on “There Is Nothing Wrong With Your Horse”